Visitation: On hour prior to the service

Service: His memorial service will be at 10:00 a.m. Monday, Sept. 12, at Anderson Funeral Home in Canton. 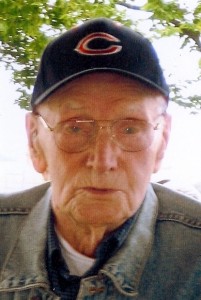 Harry W. Warne, age 91, passed away Thursday, September 8, 2011 at Hudson Healthcare in Hudson, SD.  His memorial service will be at 10:00 a.m. Monday, Sept. 12, at Anderson Funeral Home in Canton.  Visitation will be Monday beginning at 9:00 a.m. at Anderson’s.  Harry and his wife, Margaret will both be buried in the Beloit, IA Cemetery.
Harry was born May 19, 1920 at Bryant, SD, to John and Josephine (Josephson) Warne.
Harry was united in marriage to Margaret Kearns in October of 1967.  They resided in numerous locations before moving to Canton in 2004.  His wife died in 2008.  Harry was very musical and enjoyed singing and playing the guitar.  He also enjoyed hunting and fishing.
He is survived by his daughter, Tracy Montgomery (Richard Bartels) Canton, SD; 2 grandsons- Dewy and Josh Montgomery, both of Sioux Falls; 2 great-children- Clayton Schmit and Rian Montgomery; special nephew, Dick (Joann) Jewel; special niece, Betty (Gordon) Wicks; and many other nieces and nephews.
He was preceded in death by his parents, his wife, Margaret, and 14 brothers and sisters.
www.andersonandsonsfh.com