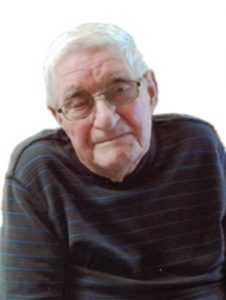 Harold John Stengel, age 95, passed away surrounded by his family on Wednesday, December 12, 2018 at Alcester Care & Rehab Center.  Funeral services will begin at 2 p.m. Thursday, December 20th at Anderson Funeral Home in Canton, SD.  Visitation will be one hour prior to the service.

Harold was born to John and Myrtle (Weast) Stengel on August 21, 1923.  He attended Canton High School but had to quit before graduating to help out his dad.   He served in the Army in WWII.  After his discharge in January of 1946, he worked in the creamery, the railroad for 8 ½ years, and at John Morrell’s before retiring in 1985 after 33 ½ years.  Harold worked hard all of his life.  He married Deloris (Eli) on May 10, 1954 in Rushmore, MN.

He enjoyed bowling, working crossword puzzles, and watching sports.  At one time, he was known to walk all over town, stopping along the way to visit with his many friends.