Service: Please join us for a celebration of Harold's life at 2:00 pm on Saturday, October 3 at Bethany Reformed Church in Canton, SD. 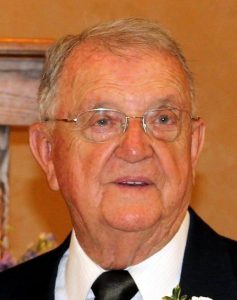 Sioux Falls, SD – Harold Dykstra passed away peacefully surrounded by his loving children on Sunday, September 27, 2020 at the age of 87, at the Touchmark at All Saints community in Sioux Falls, SD.

Harry was born at the home of his parents, Ed and Henrietta (Vis) Dykstra, in Perkins, Iowa on January 2, 1933. He received his high school diploma from Western Christian High School in Hull, IA in 1950, followed by an associate degree from Northwestern Junior College in 1952. He is preceded in death by his wife of over 52 years, Delores (Kleinwolterink), to whom he was married from April 24,1957 until her death in 2008. The couple made their home in Canton, SD, where they raised five children; Joel, Joan, Jean, Jonna, and Justin. Harold married Beverly Olson on May 3, 2014 in Rock Valley, IA, where they made their home until moving to Sioux Falls in 2019. Harry enjoyed a long career in the poultry and egg business, which he began in 1957 as the owner and operator of the Canton Produce and ended 50+ years later in 2014 at his retirement from his job as a manager of logistics and operations at Michael Foods at the age of 81.

Harry’s long and joyful life was shared by his large family, including his six sisters, five brothers, five children, sixteen grandchildren, and twelve great-grandchildren, as well as the numerous friends and acquaintances he made along the way. He lived a life devoted to Christ and the church, where he served God and others as elder, teacher, deacon, mentor and friend.

Harry was a world class visitor. During his working years he would frequently go out of his way to visit relatives and dear friends and in retirement he traveled a regular route to brighten the days of many acquaintances in care facilities around the area.

His legacy, including a steadfast love and everlasting devotion to Christ, family, and friends, is carried on in and celebrated through the lives of those he knew and loved. His wisdom, guidance, encouragement, lively conversation and irrepressible humor will be fondly remembered and sorely missed.

Please join us for a celebration of Harold’s life at 2:00 pm on Saturday, October 3 at Bethany Reformed Church in Canton, SD. Memorial contributions in Harry’s name can be directed to Hope Haven 1800 19th Street P.O. Box 70 Rock Valley, IA 51247

Anderson Funeral Home is inviting you to a scheduled Zoom meeting.