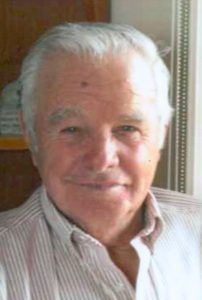 Gysbert “Guy” Bakker, age 88, died Tuesday, May 21, 2019 surrounded by his family at Sanford Hospice Foundation Cottage in Sioux Falls, SD.  Memorial services will begin at 11:00 a.m. Saturday, May 25 at Canton United Methodist Church.  Family will greet visitors one hour prior to the service.

Gysbert Tunis Bakker was born July 18, 1930 at Lake Wilson, MN to Tunis and Aldina (Beers) Bakker. From there they moved to Hudson, SD in the mid-1930s to the family farm.  In 1949 he married the love of his life (his little red head) Telma McKee and to this union 3 children were born.  On November 24, 2019 they would have celebrated their 70th wedding anniversary.

Guy farmed for many years in the Hudson/Hawarden area and did masonry work on the side.  They moved to Hudson in 1969 where he farmed and fed cattle. In 1997 after retiring from farming, they moved to Canton, SD where he worked for Kruse Lumber for 15 years.

He was a member of United Church of Christ, Hudson, SD.

He loved reading, hunting, and picnicking with family and friends.  He enjoyed playing pinochle, stamp collecting and going to auctions.  Some of his favorite times were traveling to White Bird, ID and all the stops along the way to visit their son and eating Mary’s homemade apple pies.

He was preceded in death by his parents and 3 siblings; Theresa Bakker, Grace Beadle and Simon Bakker.