Visitation: Visitation, with family present, will be Monday from 5-7 p.m. at Anderson Funeral Home in Canton. 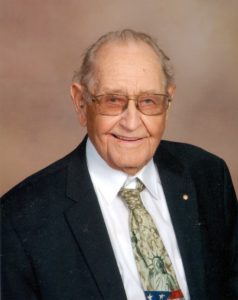 Glenn was born on the family farm near Canton, SD on July 28, 1924 to Norman and Ina (Reierson) Nelson. Growing up on the farm in the Grand Valley area, he attended Grand Valley Rural School. He served his country in the U.S Army during WWII, where he traveled to Japan.  He took over the family farm where he raised crops and livestock. During this time he worked for the government inspecting sheep.

Glenn loved bowling and bowled three 300 games in leagues and tournaments, and it was during this time that he came to a saving faith in Christ, which changed his life forever. After his conversion, God led him to a relationship with Mariann (Kay) Nelson and they were married on June 5, 1964 at Canton United Methodist Church. Glenn continued to farm, raise sheep and shelled corn for many people through the years. They raised their family of four cherished daughters on the farm until they moved to Canton in the fall of 1984. After retiring, he worked for the ASCS/FSA office and the Lincoln County Soil Conservation District.

Glenn’s passion for sharing Christ never went unnoticed. Taking a mission trip to Mexico was a highlight in his journey of faith. However, his real passion was serving with the Gideons and the Gospel Mission for decades. Speaking for both organizations was something he did frequently, along with filling in at Redeemer Free Lutheran Church, where he was a charter member. Handing out Bibles for the Gideons was always a top priority. Glenn’s dynamic personality allowed him to strike up a conversation with anyone anywhere. He had a wonderful sense of humor; loved to laugh and share his faith in Christ.

Spending time with his family was always something he fit into a busy farmer’s life, 6 a.m. golfing, fishing trips, picnicking at Newton Hills. He also loved zipping around town on his moped and always found time for a quick nap.

Time with his family was very precious. When family grew up and moved away, he was always up for a trip to see them. Grandchildren were always needing grampa to bring them to the park, give them a ride on the moped, read a book or just cuddle up on his lap.

Glenn is survived by his wife of 57 years, Kay; daughters, Robin Nelson, Lynne (Steve) Johnson and Carol (Lauren) Rosgaard; grandchildren, Alexander Unverzagt, Abigail Unverzagt (fiancé Joel Johnson), Sophia (Cape) Molstad, and Ina, Seth and Isaac Rosgaard; great-grandchildren, Amelia and one on the way; along with numbers of extended family and friends. He was preceded in death by his parents and daughter, Randi Unverzagt.