Service: Her funeral service will be at 11:00 a.m. Monday, October 3, at Anderson Funeral Home in Canton. Burial of her cremains will be next Saturday, Oct. 8, at Forest Hill Cemetery near Canton. 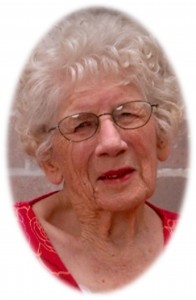 Geraldine Golden joined our Heavenly Father on Friday, September 30, 2011.  She passed away at Sanford USD Medical Center in Sioux Falls surrounded by her family.  Her funeral service will be at 11:00 a.m. Monday, October 3, at Anderson Funeral Home in Canton.  Visitation will be Sunday from 2:00 to 8:00 p.m. at Anderson Funeral Home, with family present from 6:00 to 8:00 p.m.  Burial of her cremains will be next Saturday, Oct. 8, at Forest Hill Cemetery near Canton.
Geri was born on February 28, 1924 in Hudson, SD, to Richard and Jenny (Bonnema) VanGronigen.  She grew up and attended school in Sioux Falls, and met Sylvan when her family moved next door to the Golden family.  During WWII while Sylvan was in the Army, Geri and her family supported the war effort in the shipyards of Portland, OR where Geri worked as a burner.  After the war she came back to Sioux Falls and worked at Shipley’s Laundry.
After Sylvan was mustered out of the Army in December of 1945, he and Geri were married January 18, 1946.  The couple moved to a farm northwest of Canton in February 1948 where they farmed.  Geri worked in the fields, planted a large vegetable garden and canned the produce, raised chickens and broilers, raised four children, sewed clothes for the kids, polka danced with a Couples Club, and was an active member of Beaver Creek Lutheran Church and VFW Auxiliary.
Sylvan and Geri moved from the farm to Canton in 1968 and Geri worked at Canton-Inwood Hospital as a housekeeper.  In 1973 they moved to Phoenix, AZ, where Geri worked in drapery shops and she and Sylvan participated in dance performances with a German-American Club.  In 2000 they moved back to Canton where they bought a house on South Main Street.
Geri enjoyed spending time with her family, quilting, music, reading, working with the VFW Auxiliary, where she was lifetime member, and of course, polka dancing.  She and Sylvan followed the polka dance circuit and met many friends through their dancing.  Geri was quiet and an exceptional listener, laughed easily, and was very supportive and encouraging.  In 2009 Geri achieved a life-long dream of visiting Hawaii with her family and especially enjoyed standing in the ocean.  She said that if she had a chance, she would definitely do it again.  In the last month of her life Geri went polka dancing in Humboldt, IA attended several music performances on a trip to Branson, MO, visited her sisters, each of her children and several of her grandchildren.
Grateful for being allowed to share her life are her husband of 65 years, Sylvan; four children- Connie (Don) Arp, Sioux Falls, Charlotte (Steve) Espeland, Canton, Charles Golden and Connie Taylor, Sioux Falls, and John (Penny) Golden, Sioux Falls; 16 grandchildren; 31 great-grandchildren; 3 great-great-grandchildren; 3 sisters- Betty Barone, Carterville, IL, Genevieve Carstensen, LeMars, IA, and Marilyn Kolker, Sioux City, IA; one brother, Everett Jaus, Baltic; and several nieces and nephews.  She was preceded in death by her parents and one brother, Richard VanGronigen.