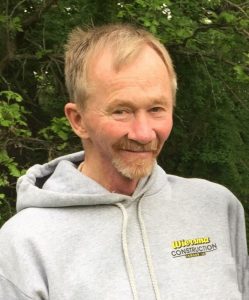 Gerald Myron Wiersma, son of Jessie and Harvey Wiersma, was born in Orange City, Iowa on May 20 1951. He passed away on July 18, 2018 at Sanford USD Medical Center in Sioux Falls, South Dakota. Ger grew up on his family’s farms near Middleburg, Iowa, Magnolia, Minnesota, and Lester, Iowa, where he developed his love for animals and the outdoors. He attended school in Newkirk. Iowa, Magnolia, Minnesota and West Lyon, Inwood, Iowa, then received a degree in auto body repair at Northwest Iowa Technical School, Sheldon, Iowa. He was united in marriage to Donna De Boer, daughter of Harriet and Jake De Boer on June 1, 1973 in Hull, Iowa. To this union were born four sons, Jason, Craig, Brad, and Jesse. They lived on an acreage north of Rock Valley, Iowa, and Ger worked at K & J Body Shop in Rock Valley for many years. They moved to a farm southwest of Inwood in 1988 where he farmed and raised several breeds of puppies.

Ger received his first cancer diagnosis in 1982 and lived with ongoing medical issues throughout the remainder of his life. With each setback or new level of disability, he adapted without complaining, fighting courageously until cancer claimed his life.

Ger enjoyed hunting, fishing, playing cards, and most of all spending time with his grandkids and family. He was a man of faith and prayer and served as deacon in the First Reformed Church of Doon, Iowa and as elder in Bethany Reformed Church in Canton, South Dakota. He developed a heart for the incarcerated and began attending services and events at Living Stone Prison Church in Springfield, South Dakota. When he was no longer able to speak, he brought his writing board into the prison so that he could still communicate with the inmates. They became some of his greatest prayer warriors during his final illness.

Welcoming him into heaven were his parents Harvey and Jessie Wiersma, his parents-in-law Jake and Harriet (Mouw) De Boer, a brother-in-law Clifford De Boer, and a nephew Matthew Hansen.