Visitation: Visitation with family present will be Monday from 5-7 p.m. at Anderson Funeral Home in Canton, SD. 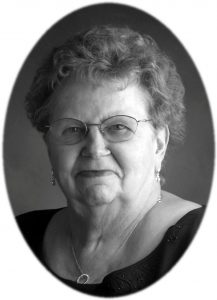 Enola was born on March 11, 1938 in Hudson, SD to Selmer and Selma (Berg) Ekle.  She graduated from Canton High School in 1956.  She married James Kroger on June 14, 1957 at Canton Lutheran Church.  The couple lived and farmed Northwest of Inwood, IA.

In addition to raising her 6 children, Enola work at Sears for 25 years, retiring in 2003.  Enola was an avid supporter of CHS and West Lyon sports.  She belonged to several card clubs and enjoyed cooking and baking, especially apple pie and Norwegian treats, reading the Sioux Valley News, visiting, and spending time with her family, especially her grandchildren.