Visitation: Visitation will be from Friday from 2-7 p.m., family present from 5-7 p.m., at Anderson Funeral Home in Canton, SD. 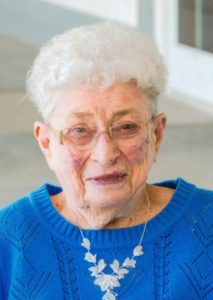 Eileen Reynolds, age 87, died Thursday, October 20, 2022 under hospice care surrounded by her family.  Funeral services will begin at 10:30 a.m. Saturday, October 29, 2022 at Canton Lutheran Church.  Visitation will be from Friday from 2-7 p.m., family present from 5-7 p.m., at Anderson Funeral Home in Canton, SD.  In lieu of flowers, memorials may be directed to Sanford Hospice Foundation Cottage.

Eileen Gubbrud was born on November 7, 1934 to Palmer and Bertha (Penzhorn) Gubbrud at Sioux Valley Hospital in Sioux Falls, SD.  Eileen was baptized and confirmed at Canton Lutheran Church.  She received her schooling at Cottage Grove #29, Canton High School, and Nettleton Business College.  Eileen was united in marriage to Milton Reynolds on May 24, 1957 at Canton Lutheran Church.

Eileen was employed at Sioux Valley Hospital for one year, at Equitable for 4 years, and began farming with her husband in 1958.  They farmed together until 1993.  They remained on the farm until moving into Canton in 2004.  Eileen moved to Grand Living at Lake Lorraine in May of 2019.

Eileen was a lifelong member of Canton Lutheran Church where she served on various circles and held various office positions.  She also was a 4-H leader.   Eileen enjoyed working on the farm, especially spring and fall field work.  Milton and Eileen also enjoyed dancing and traveling.