Visitation: Visitation will be Wednesday from 2-7 p.m., family present from 5-7 p.m., at Anderson Funeral Home in Canton, SD. 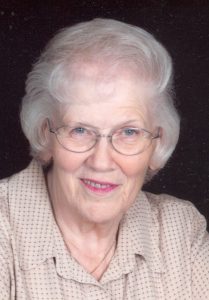 Dorothy was born on July 28, 1932 near Canton, SD to Martin and Gertie (Studstahl) Severson.  She graduated from Canton High School in 1950.  She met her future husband, Lawrence McKenney, at the roller rink.  They were married on December 22, 1952 in Canton, SD.  The couple lived in Sioux Falls before moving to a farm near Inwood, IA.

In addition to raising her family, Dorothy worked at Red Owl Grocery, Raven Industries, and A&R.  In her younger years, she delivered the Sioux Valley News and was active in roller dancing competitions.  She was famous for her cooking, especially her pies, and enjoyed bowling, crocheting, and playing cards.  She loved her family and treasured time spent spoiling her grandchildren.  She was a long-time member of Canton Lutheran Church and a former member of the VFW Auxiliary.