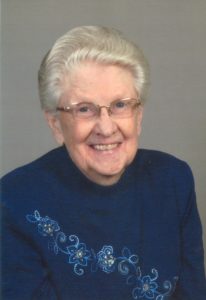 Dorothy Hoffman, age 87, died Thursday, August 12, 2021 surrounded by her family.  Funeral service will begin at 2:00 p.m. Saturday, August 14 at Canton Lutheran Church.  Family will greet visitors one hour prior to the service.  In lieu of flowers, memorials may be directed to Canton Meals on Wheels, Canton Lutheran Church, or AseraCare Hospice.  A link to the livestream of the service can be found at www.andersonandsonsfh.com

Dorothy was born on November 9, 1933 in Sioux City, IA to Charles and Beulah (Kelso) Beatty.  She graduated from Central High School in Sioux City, IA. After graduation, she worked as a telephone operator for Northwestern Bell.  She married Edward R. “Dick” Hoffman on March 19, 1954 in Sioux City, IA.  The couple lived in Elk Point, SD where they operated a service station. The couple moved to Canton, SD in 1965 where they owned and operated Dick’s Texaco, Hoffman Oil, and Pump & Pak until retiring in 1993.

In addition to raising her children and bookkeeping, Dorothy enjoyed bowling, reading mystery novels, playing cards, and golfing.  She was also a great cook, accomplished fisherwoman, and the 1976 Hiawatha Golf Club Champion.  Above all else, she loved family gatherings and attending her children’s and grandchildren’s activities.

Dorothy is survived by her sons, Mike (Marcia) and Gary (Kathy); daughters, Lori (John) Lems and Diana (Jim) Wiebe, all of Canton, SD; 11 grandchildren; 12 great-grandchildren; sister, Shirley (LeRoy) Mattes; along with numerous other relatives and friends.   She was preceded in death by her husband, Dick; granddaughter, Shantell; parents; brothers, Charles, Bob, James, and John; and sister-in-law, Myrna.