Visitation: Visitation, with family present, will be Sunday from 4-6 p.m. at Anderson Funeral Home in Canton, SD 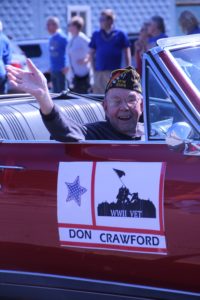 Don was born on June 6, 1924 south of Fairview, SD to Clifford and Maggie (Fossum) Crawford.  He graduated from Canton High School in 1942.  After graduation, he served his country during WWII as a radioman in the U.S. Navy.  He married Carol Madland on October 12, 1947.

After his discharge, he was a print setter for the newspaper and sold insurance until he became a partner and later the owner of the local bowling alley, Town & Country Lanes.  Don taught the game of bowling to countless people until retiring at age 90.   He also started the VFW Teener baseball program in Canton in the early 1960’s.

When he wasn’t at the bowling alley, Don enjoyed telling stories, spending time with family, golfing, pheasant hunting with his German Short Hair Pointers, and cheering on the St. Louis Cardinals.  He was also an active member and past commander of the Canton VFW and a lifelong member of Canton Lutheran Church. Don will be remembered for his strong work ethic and his compassion.

19 messages have been left