Visitation: Visitation, with family present, will be Sunday from 4-7 p.m. at St. Mary Catholic Church in Larchwood, IA. A scripture service will begin at 7 p.m.

Service: Mass of Christian Burial will be held at 10:00 a.m. on Monday, August 19, 2019, at the Sanford Pentagon (2210 W Pentagon Pl, Sioux Falls, SD) to be followed with burial in the St. Mary Catholic Cemetery in Alvord, Iowa. 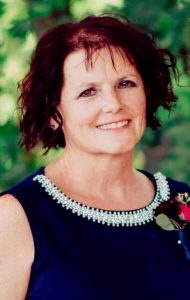 Stephanie Jean (Dorcey) Schreurs, age 60, of Larchwood, Iowa, passed away on August 13, 2019 at Avera McKennan Hospital in Sioux Falls, South Dakota after succumbing to injuries sustained in a motor vehicle accident she suffered while on duty in Lyon County, Iowa.

Stephanie was born April 3, 1959, in Wayne, Nebraska to Joseph and Patricia (Tighe) Dorcey.  Stephanie was the sixth addition to the family and joined her siblings Michael, Monica, Maureen, Joseph, and Patrick.  Shortly after, Julia, Sean, and Brendan came into the picture for a grand total of nine children.  The family lived on an acreage just outside of the Wayne city limits.  Stephanie attended Wayne High School where she participated in every sport they allowed her to: volleyball, basketball, and track.  She graduated high school in 1977, and in 2008, she was inducted into the Wayne High School Athletics Hall of Fame.

Following high school, Stephanie migrated north to Sioux City, Iowa to attend Briar Cliff College where she played volleyball and basketball.  In October 1979, she married Daniel Schreurs.  They lived several places and ultimately settled on the family farm outside of Alvord, Iowa.  During their marriage they had five children: Matthew, Theresa, William, Jacqueline, and Mary.  In 2001, Stephanie relocated to Larchwood, Iowa.  After an educational hiatus, Stephanie returned to college and received her Bachelor of Arts from Augustana College in 2003.

Stephanie joined the Lyon County Sheriff’s Office as a dispatcher in January 1995 and became Lyon County’s first female deputy in August 1997.  Her impact on the community is summed up by this comment from a resident of Lyon County: “[Stephanie] did so much off and on duty.  She never discriminated against anyone in this town.  She always wanted to see the best in people.  She always talked to anyone.  She was ready at any time of day or night to help others on or off duty.  She truly will be missed.”  Not only did Stephanie serve her county as a deputy, she also contributed to her communities in numerous ways, such as developing a children’s recreational program in Alvord, being a member of the Larchwood Emergency Medical Services team, and serving as an active member of the St. Mary Parish.  She also stayed busy with several part-time jobs, including ceramic tile installation, substitute teaching, cleaning and maintenance for the City of Larchwood, and farming.

In spite of how busy she was with everything else, Stephanie’s favorite roles were being a mother and a grandmother.  She loved spending time with her family and could always be counted on for a listening ear and advice, a last-minute meal, a ride, a home improvement project, a babysitter, and being a loud fan “coaching” from the sidelines.  Some of her favorite things included sugar, the New England Patriots, crafting, horses, the sun, and beaches.

Stephanie is reunited with her son and golf partner, Matthew Schreurs, who preceded her in death in 2018, as well as her parents, Joseph and Patricia Dorcey.