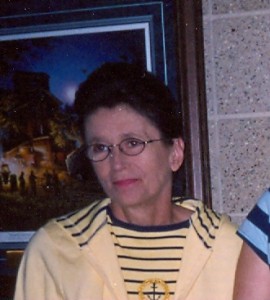 Darla was born April 25, 1947 at Park Rapids, MN to Clarence and Leone (Stephenson) Nussbaum.  She attended school in Lennox and Canton.  Darla married Johnnie Ovre, Jr. in 1963.  They made their home in the Canton area.  She worked as a bartender at the Canton Municipal, Crow Bar in Sioux Falls, the Lennox Legion, and Scotty’s Bar in Worthing.  Her favorite pastime was camping and fishing.  She was an avid collector and enjoyed going to auctions.  Her pets were her babies.