Service: Mass of Christian Burial will be at 10:30 a.m. Tuesday, December 3, at St. Dominic’s Catholic Church in Canton. A private family burial will be held at St. Michaels Cemetery in Sioux Falls. 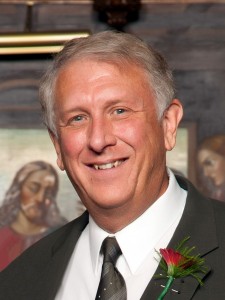 Canton.  Daniel Thill, 63, passed away peacefully with his wife by his side on Thursday, November 28, 2013 at Dougherty Hospice House in Sioux Falls.  Mass of Christian Burial will be at 10:30 a.m. Tuesday, December 3, at St. Dominics Catholic Church in Canton.  A private family burial will be held at St. Michael Cemetery in Sioux Falls.  Visitation will be Monday from 1:00 to 4:00 p.m. at Anderson Funeral Home in Canton and will resume at St. Dominics at 6:00 p.m.  A scripture service will begin at 7:00 p.m. at the church.

Dan was born April 10, 1950 at LeMars, IA, to Donald and Darlene (Bohlke) Thill.  At age 8, he and his family moved to Sioux Falls where he attended Little Flower Elementary.  He graduated from O’Gorman High School in 1968 and then attended South Dakota State University.

Dan was united in marriage to Joan Mikkelson August 27, 1971 at St. Joseph’s Cathedral in Sioux Falls.  They made their home in Sioux Falls, until they moved to Canton in 1974.  Dan was in the landscaping business for 43 years and most recently with Splitrock Nursery in Brandon.   Dan was a certified arborist and also one of the voices of the radio program “Land Language” for many years.  Dan loved spending time with his grandchildren and working outdoors on their acreage outside of Canton.  He was a long-time member of St. Dominics Catholic Church and the Nurseryman’s Associations in South Dakota and Minnesota.

Dan was preceded in death by his grandparents, parents, and his brother Dean.

Memorials can be directed to the Avera McKennan Foundation or the Dougherty Hospice House in Sioux Falls.