Visitation: Visitation will be Tuesday from 2 to 8:00 p.m. at Anderson Funeral Home in Canton, with family present from 6 to 8:00 p.m.

Service: Funeral services will be at 10:30 a.m. Wednesday, June 10, at Canton Lutheran Church. 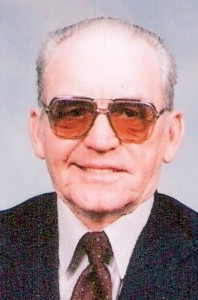 Charles N. Hill, 94, passed away Saturday, June 6, 2015 at Canton Good Samaritan Society.  Funeral services will be at 10:30 a.m. Wednesday, June 10, at Canton Lutheran Church. Burial will be at Forest Hill Cemetery near Canton.  Visitation will be Tuesday from 2 to 8:00 p.m. at Anderson Funeral Home in Canton, with family present from 6 to 8:00 p.m.

Charles Nellis Hill was born August 3, 1920, at Lennox, SD to Charles and Nora (Roe) Hill.  He attended Schiager rural school northeast of Canton.  On February 4, 1942, Charles was married to Gladys Knutson at her parent’s home.  Charles was drafted into the U.S. Army and served during WW II in New Guinea and the Philippines and was honorably discharged on October 15, 1945.  Charles and Gladys lived in the city of Canton and in the rural Canton area for all their years together.  Charles farmed the Hill family farm near Canton until 1961 when he quit farming, moved to their final home in Canton and took a job as a field man for Sokota Hybrid Seed Corn Company headquartered in Brookings, SD.  Charles retired from Sokota Hybrid in 1982.  Charles and Gladys lived in their Canton Home until May of 2011 when they both moved to Canton Good Samaritan Home where Charles resided until his death.  They raised two children: a son Larry and a daughter, DeAnn.

Charles was a loving husband and father and devoted his life to his wife and children.  He was a member of Canton Lutheran Church.

In addition to his parents and his wife Gladys (2012), Charles was preceded in death by 2 sisters, Charlotte Edwards and Erma Lyso.