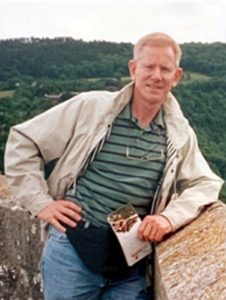 Charles “Charlie” Davison Cobb was born on June 9th, 1949 in Eastern Nigeria but was raised in Gloucestershire, England with his three siblings Johnny, Sophy, and Paul. At 13, he decided to go to a Merchant Navy training college in NW Wales. From there, he joined the Merchant Navy as a cadet officer on board their merchant ships around the world. He then decided to continue his schooling at Cardiff University to study Maritime Studies. Upon graduation, he became a Master Mariner at a company whose headquarters were based in Tampa, Florida. This led him to eventually immigrate to the United States of America in 1971. There, in the land of opportunity, he pursued his life-long dream of being a business owner and building a family.

Some of his most cherished memories were spent backpacking in the Sierra Nevada mountains with his bros, tinkering at his parent’s chateau in Moiron, France, serving his church and his Savior Jesus Christ, spending time with family and friends in Southern California, and moving to Canton, SD to be with his two grandchildren.

He was welcomed home to Heaven by his Lord and Savior on October 22nd, 2021 at his residence in Canton, SD surrounded by his family after battling Lewy Body Dementia the last five or so years.

Charles was a faithful servant of the Lord, a devoted son, loyal friend, loving husband, disciplined and proud father, and an even better papa!

He will be remembered by his wife, Shannon Anette Cobb, his children Peter Charles (Kristi) Cobb, Christopher William Cobb, Mathew Jason Golla, and Jessica Marie (Andrew) Niemann, and his grandchildren Taylor Jane Cobb and William Charles Cobb, alongside countless relatives and friends. He was preceded in death by his parents Frederic Peter Cobb and Helen Jane Mary Cobb.

In lieu of flowers, please prayerfully consider donating to the Lewy Body Dementia Association, to which Charles donated his brain to research in hopes of finding a cure.