Visitation: A visitation, with family present, will be held on Sunday, February 20th from 4-7 p.m. at the Brandon Valley Assembly of God Church, Brandon, SD.  A time of sharing will be held at 5:30 p.m.

Service: A Celebration of Carolyn’s Life will begin at 2:00 p.m. Monday, February 21st at Brandon Valley Assembly of God Church.  A private family burial will take place prior to the service. 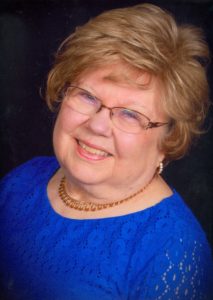 Rev. Carolyn J. Gage, age 85, died Friday, February 11, 2022 at her home surrounded by her family.  A visitation, with family present, will be held on Sunday, February 20th from 4-7 p.m. at the Brandon Valley Assembly of God Church, Brandon, SD.  A time of sharing will be held at 5:30 p.m.  A Celebration of Carolyn’s Life will begin at 2:00 p.m. Monday, February 21st at Brandon Valley Assembly of God Church.  A private family burial will take place prior to the service.  A link to the live stream of the service will be available prior to the service at  www.andersonandsonsfh.com.

Carolyn Joyce Gage was born on July 25th, 1936 to George Leonard Pederson & Esther Elizabeth (Ellison) Pederson at Sioux Valley Hospital, Sioux Falls, SD.  Her first years of life were on a farm near Harrisburg, SD. Then her parents bought a farm east of Worthing, SD, where she lived until leaving for college.  She attended Sunnyside Country School, followed by high school in Canton, SD.  In her senior year of high school, she traveled for IBM, filling in for the world champion typist, exceeding the record, typing 196 words per minute with zero errors. She turned down an offer to represent IBM world-wide.  She graduated from Canton High School in 1954 with honors.  After high school, she worked for one year at the Savings & Loan in Canton, SD to save money for college and to buy a marimba. In the fall of 1955, she left home to attend North Central Bible College in Minneapolis, MN. It is there that she met the love of her life, Clarke Everett Gage.  They were married June 8, 1956 at the Gospel Tabernacle, Sioux Falls, SD.  While at North Central, she worked as an Officer at a Savings & Loan, managed Lend Lease National Car Rental, was the pianist for the college quartet, played in a marimba trio, and assisted Clarke in ministry under Rev. Bob Hanson at Bethel Assembly of God, Minneapolis, MN.

In 1958, they moved to Beckley, West Virginia to serve on staff with Rev. T.M. Waldron, as general assistant and youth pastor at First Assembly of God. They were also involved with daily radio and weekly television programs.  In 1961, they moved to Luverne, MN, where they pastored and had a weekly live television program, Chapel Time, on KSOO, which aired Saturday evenings at 6:00pm.  Chapel Time had a larger audience than The Lawrence Welk Show that aired during the same time on a competing station.  While in Luverne, Carolyn was an Officer at Luverne Federal Savings & Loan. In December of 1965, they accepted the pastoral call to Crosby Assembly of God, Crosby, MN.  They continued Chapel Time on KSOO for one year after leaving Luverne, MN.  While in Crosby, they produced a weekly and daily radio program on KKIN out of Aiken, MN.  In 1973, they accepted the invitation to pastor First Assembly of God in Sisseton, SD. They then moved to La Crosse, WI in December of 1974 to pastor First Assembly of God La Crosse, where they continued doing a weekly radio program. This move accommodated the educational needs of their youngest son, who was deaf.  In June of 1978, they began pastoring Evangel Temple in Moorhead, MN, where they pastored for the next 22 years.  In 2000, they became missionaries, pastoring the Moscow International Assembly and teaching at the Assembly of God Seminary in Moscow, Russia.  They also served in the capacity of Pastoral Care for missionaries in all of Eurasia, with a retreat center, “Shepherds Cove,” located on the Baltic Sea, outside of Tallin, Estonia.  They continued Shepherds Cove virtually from Onalaska, WI and Harrisburg, SD.

Carolyn was a beloved wife, mother, grandmother, & great grandmother.  She was the ultimate hostess, making you feel like royalty with her beautifully set table and gourmet meals.  She was a planner, organizer and an efficiency expert. She was always up for fun and new adventures! Her delightful stories captivated children and adult audiences alike.

Carolyn was ordained with the Assemblies of God in 1993. She served in many capacities all through the years. She served as youth advisor & pastor, organized woman’s ministries, taught Sunday school, was the church organist and music program coordinator. She led college & early career ministries, led Bible studies, led mission trips, was a retreat and conference speaker, counseled and mentored many people, as-well-as, teaching in Bible schools and seminaries world-wide. She was an amazing communicator, who never met a stranger, connecting with people wherever she went. She welcomed opportunities to share the Good News of Eternal Life through faith in Jesus Christ.    She was an eternal optimist whose cup was always full. She was an accomplished musician. People especially loved to hear her play the marimba.  Carolyn fought the fight, finished the race, and remained faithful to her Savior.

Live stream available on the following: