Visitation: Visitation will be Friday from 2-7 p.m., family present from 5-7 p.m., at Anderson Funeral Home in Canton, SD. 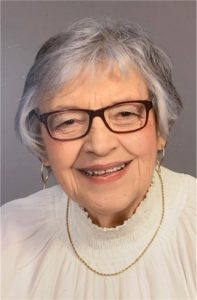 Caroline was preceded in death by her parents George and Bernice Macumber and her husband of 41 years, Jim.  She is survived by her sister Jane Weber; three children, Stephen, Mark and Judy Deinema; daughter-in-law Vicki; grandchild Hannah and Caroline’s beloved dog Ole.

Caroline and Jim met at the University of Iowa and moved to Canton, SD in 1956 and began a life of service to their community and family.  Caroline served many roles.  She was teacher of piano, cooking and Weight Watchers.  She served as a mentor to children and teens in need.  Following her love of fiber arts, she  engaged in sewing, spinning, weaving and knitting.  She had her sheep Dakota for wool. Music rang out in her home with her early years as a tuba player and later years teaching and playing piano and harp.  She enjoyed skiing, camping, fishing the Missouri River and tending oversized gardens. Caroline loved adventure, even after surviving breast cancer she was rafting rivers in Colorado and Utah at age 60 and backpacking the Grand Canyon at age 70.  Caroline was founder of the Canton Recycling Program and the Jim Deinema Canton Community Foundation.  She was an active member of Canton Lutheran Church.   On her 80th birthday she left her Canton roots to spend her final years at Touchmark  in Sioux Falls.  In that All Saints neighborhood she again had many friends and she and Ole were an inspiration to their neighbors.

In Caroline’s final months she faced her truth of impending death with a peaceful acceptance citing her deep gratitude for a life well lived and rich with blessings.

Her children and friends are graced with the gift of knowing Caroline and sharing her many gifts.  Caroline lived and believed that “God’s creation is love.”