Visitation: Visitation, with family present, will be Wednesday from 5-7 p.m. at St. Mary’s in Larchwood, IA. A Scripture Service will be held at 7 p.m. 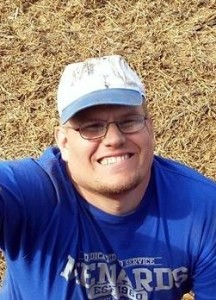 It is with great sadness that the family of Cade Curtis Stensland, loving husband, father, and son, announce his passing in a tragic accident on Thursday, December 21st, 2017. Cade would have been 32 years of age on Friday, December 22nd.  Cade and his family lived outside of Larchwood, IA near Klondike.

Cade was born to Curtis and Stephanie Stensland in Sioux Falls, SD, on December 22nd, 1985 and lived on the family farm for most of his life. Cade graduated from West Lyon High School in 2004 and went on to earn a degree in Diesel Mechanics from Iowa Lakes Community College in 2006.  He drove truck for Dean Foods at the time of his death, in addition to working on the family farm.  Cade met the love of his life, Christina, and they were married on January 24th, 2014.  Together, they had three beautiful children.  The family is thankful that Cade was able to meet his son, born on December 19th, 2017.  Cade found happiness on the farm and with his family.  He was a huge fan of all things racing and worked on a pit crew for many years.  He loved to take his girls in the combine and they treasured that special time with Daddy.  Cade recently started an exciting adventure with his family by beginning Star Sister Organic Hops Farm.  He took pride in his work and wanted to build great farm memories for his children to have.

A “Go Fund Me Page” has been established for Cade’s children education fund.  The wife of the deputy sheriff who assisted at Cade’s accident began this funding effort. Please go to- https://www.gofundme.com/cade-stenslands-family.

“When you were born, you cried and the world rejoiced.  Live your life in a manner so that when you die the world cries and you rejoice.”

Leave a Reply to Rod and Mary Scheidt Cancel reply