Service: Funeral services will be at 10:00 a.m. Monday, Nov. 12, at Canton Lutheran Church, with burial at Forest Hill Cemetery. 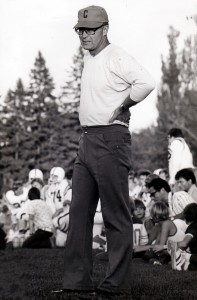 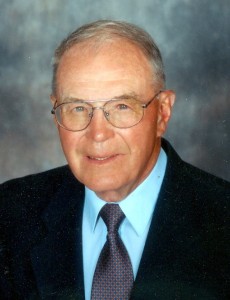 Burdell Joseph Coplan, age 84, passed away on Thursday, November 8, 2012 at Sanford Canton-Inwood Hospital, following a strong and courageous battle with cancer as Jesus took him home to be by his side. Funeral services will be at 10:00 a.m. Monday, Nov. 12, at Canton Lutheran Church, with burial at Forest Hill Cemetery.  Visitation will be Sunday from 2 – 8:00 p.m. at Canton Lutheran Church.  Family will greet visitors from 5 – 7:00 p.m.  A prayer service will begin at 7:00 p.m.

Burdell was born January 13, 1928 in Watertown, SD, to Joseph and Ella (David) Coplan.  He graduated from Watertown High School in 1946.  Burdell proudly served his country during both WWII and the Korean War.  While serving, he played football for the US Army. He played in the Rice Bowl game in Yokohama, Japan on New Year’s Day in 1947.  Following his discharge, he attended USD at Vermillion, SD, graduating in 1952.  While at USD, he played football for the Coyotes, helping win the 1951 North Central Conference Title.  He was named to the USD 1950’s team of the decade as a defensive back.

Burdell and his wife, Betty, started the local chapter of Fellowship of Christian Athletes holding meetings in their home.  He was a member of Canton Lutheran Church and Canton Lion’s Club.  He served as a Lincoln County Commissioner for 16 years and was a probation officer for many years.  He and Betty owned and operated the Canton Greenhouse from 1980 to 1990.  Cop was an avid hunter since age 12.  He missed the opening of pheasant season 4 years, three times while in Korea and this past opening.  He regularly attended many local athletic games and events since his retirement.  Coach has remained in close contact with many of his former players and fellow coaches.  He was known for his good sense of humor, outstanding memory, his love of telling stories and reminiscing about the old days. He enjoyed working and helping on the farm. He was a devoted grandpa and loved spending time with his grandkids.

He was preceded in death by his parents, sister Maythel Dahl, brother Elwood Coplan, and grandson Seth Kroger.

In lieu of flowers, memorials may be directed to the Canton Booster Club in Burdell’s honor.

23 messages have been left