Visitation: Visitation will be Thursday from 5-8 at the church, with the family present from 6-8 p.m. 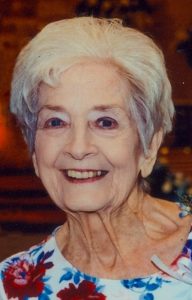 Bonnie Jean (Rauch) Hoover, age 87, died Monday, December 10, 2018 at Dougherty Hospice House surrounded by her family.  Memorial services will begin at 11:00 a.m. Friday, December 14 at Canton United Methodist Church.  Private family burial will take place prior to the service.  Visitation will be Thursday from 5-8 at the church, with the family present from 6-8 p.m.

Bonnie was born on March 8, 1931 in Avon, SD.  She went to grade school in Avon, Springfield, Forestburg, and graduated from White Lake High School in 1948.  She attended college at Springfield Normal School and graduated from Sioux Falls University with a BA in Education.  She taught in country schools for 7 years before they were consolidated with the town schools.   She then taught kindergarten in Canton for 25 years.

Bonnie married Dwight Hoover in Canton on April 29, 1950.  They have been members of the Canton United Methodist church since April 11, 1963.  She was a lifetime member of the SDEA/NEA, CEA, American Legion, and the VFW Women’s Auxiliary. She was also a lifetime member of the Women of the Moose #273 in Sioux Falls where she held several positions including Mother of the Year in 1994.  She had worked with Junior Girl Scouts and taught Sunday School while living in Sioux Falls for 6 years.  She also taught Sunday School in Canton for many years.

After retiring from teaching, she and Dwight drove cars for Bob Lier Ford.   She enjoyed working with children, camping, traveling, MN Twins baseball, and most of all her family.  Sunday brunch was always special at her house.