Visitation: Visitation with family present will be Friday from 5-7 p.m. at Anderson Funeral Home in Canton. 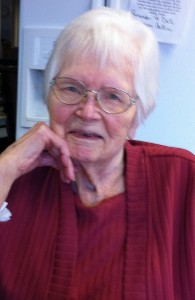 She worked at the Harold Bogue Law Office, Lincoln County Title Company and was named Secretary/Treasurer of First Federal Savings and Loan of Canton until retirement.

She was an amazing woman and her faith, family, friends and community were very important to her.  She loved life and loved people.

She was a civic leader in Canton with many contributions to the Senior Citizen’s Center, the Good Samaritan Center, VFW, American Legion, Canton- Inwood Hospital and Canton United Methodist Church.  She became a cheerleader with Pat Rudolph to get sponsorship by the Canton Senior Citizen’s Center to fund a bus to answer the transportation needs of the Canton Community. She recognized the importance of volunteering from her mother through her work with the VA Hospital and when her husband was a resident of the nursing home. She volunteered at the nursing home, Assisted Living and hospital. She knitted more than 50 baby blankets for Project Linus or newborn babies born at Canton-Inwood Hospital.

She was preceded in death by her husband, Virgil, her brother, John “Bud” Edwards, her parents, and several brothers and sisters in law.

Celebration of life services will begin at 10 a.m. Saturday, March 3 at Canton United Methodist Church Canton, SD with burial to follow at Forest Hill Cemetery.   Visitation with family present will be Friday from 5-7 p.m. at Anderson Funeral Home in Canton.    Condolences can be left at our website and at a site set up by Bea’s son at www.grandcountymortuary.com.

26 messages have been left