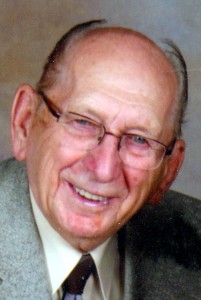 Art was born April 8, 1917 on a farm near Lennox to Boref and Berget (Gustafson) Ramse.  He attended Hill District # 82 Country School near Worthing, SD.  At an early age he began farming with his father.

Art was united in marriage to Opal Stengel November 15, 1941 in Canton, SD. Shortly after they were married, the couple moved to Ohio where Art contributed to the war effort by repairing and riveting damaged airplanes.  They farmed and raised livestock east of Lennox and later on their farm west of Canton. Art retired at age 62.  Art raised purebred Chester Whites, and enjoyed showing his hogs at the Sioux Empire Fair.  He was a founding member and former president of the South Dakota Pork Producers Council.  He was instrumental in establishing the Porcine Burn Fund in 1977.  The Ramses’ were named Sioux Empire Farm Family of the year in 1982.  His interest in old-time fiddlers, led him to a hobby of building 50 violins and repair of many others.  He was a member of Canton Lutheran Church and Sons of Norway.  He also enjoyed square dancing, golfing, and reflexology.