Visitation: Family will greet visitors one hour prior to the service at Heritage Funeral Home in Sioux Falls, SD. 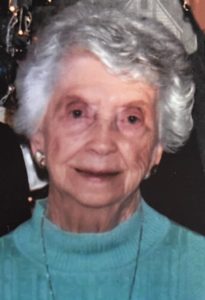 Arlis Eiesland, age 102, died Saturday, December 17, 2022 at Touchmark at All Saints in Sioux Falls, SD.  Funeral services will begin at 11:00 a.m. Saturday, February 11, 2023 at Heritage Funeral Home in Sioux Falls, SD with burial to follow at Beaver Creek Cemetery, rural Canton, SD.  Family will greet visitors one hour prior to the service.

Arlis was born on July 25, 1920 in Forest City, IA to Mons and Martina (Olson) Twedt.  She graduated from Woden High School.  After graduation she worked as a housekeeper and in a café.  While working at the café, she met her future husband, Lloyd Eiesland.  They were married on October 13, 1940 in Alvord, IA.  Arlis and Lloyd farmed near Keister, MN for five years before moving to a farm near Harrisburg where they lived and raised their family until 1992.  The couple then moved to Canton and later to Sioux Falls.  Arlis had been a resident of Touchmark at All Saints since 2008.

In addition to raising her 4 children, Arlis was a dedicated farm wife.  In her younger years, she enjoyed gardening, dancing with her husband, needle point, and was an active member of Beaver Creek Lutheran Church until it closed.   She then joined Canton Lutheran Church and was currently a member of Our Savior’s Lutheran in Sioux Falls, SD.  She will be remembered for her cooking and baking, especially her apple pies.