Visitation: Visitation with family present will begin one hour prior to the service. 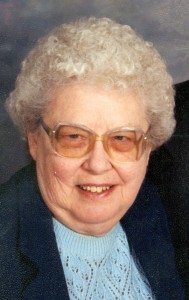 Annabelle was born on January 8, 1922 in Fairview, SD to Frederick and Frannie (Wiarda) Van Ness. She attended Canton High School.   She married John Oldenkamp on November 5, 1947 in Luverne, MN. He died on March 11, 2009.  She lived in several area towns before moving to Canton in 1970 where she remained until her death.

Annabelle work as a nursing aide and housekeeper at Good Samaritan Society Canton before retiring in 1984.  She has been a member of Canton Lutheran Church and WELCA since 1971. She was a dependable hard worker who enjoyed sewing, baking, cooking, gardening, and refinishing furniture.

Grateful for sharing her life are her daughter, Betty (Nels) Ekle, Pierre, SD; sons, Charles (Ruth), Alexandria, MN and Sid (Paula), Sioux Falls, SD;  8 grandchildren; 9 great-grandchildren; 2 great-great-grandchildren;  along with numerous other relatives and friends.  She was preceded in death by her husband, John; parents; brothers, Dick and Cecil; and sisters, Jeanette, Alice and Gertrude .