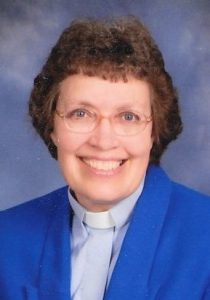 Ann was born on May 29, 1951 in Sioux Falls, SD to Boyd and Lorraine (Johnson) Steensland.  She graduated from Augustana Academy in 1969 and SDSU with a Bachelor of Journalism in 1973. She married Charles Fred Webb on September 17, 1977 in Canton, SD.

In 1982, she graduated from Wartburg Seminary in Dubuque, IA with a Master of Divinity. She was ordained in August 28, 1982 into the Lutheran ministry. Her first call was at Christ Lutheran in Alvord, IA, followed by Strand Lutheran in Dunbar and St. John’s Lutheran in Tama, IA; Good Shepherd Lutheran in Adair, IA; Bethany Lutheran and Belleview Lutheran in Howard, SD; and Trinity Lutheran in Estelline, SD. She retired in 2013, moving back to Canton with her husband and attending Grand Valley Lutheran.

She was preceded in death by her mother, Lorraine Steensland; grandparents; sister-in-law, Mary Steensland; mother and father-in-law; and several brothers-in-law.