Service: His funeral will be at 10:00 a.m. Tuesday, Jan. 6, at Canton United Methodist Church. 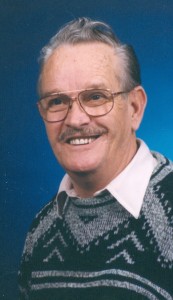 Albert Hiram Van Laar was born May 18, 1929 to John and Mary Van Laar on a farm near Schindler, close to Lincoln Lake.  He had 5 sisters.  He was raised in Canton and lived on various farms in the area.  He graduated from Canton High School in 1947.  After graduation he helped his parents on their large dairy farm and attended a trade school in Springfield, SD for 2 years.  He married Ruth Mull in 1955 and to this union had 2 sons, Randy and Kevin.  They later divorced.

Albert worked for Tuthill Lumber Co. for 2 years and Larson Wholesale Hardware Co. for 28 years.  He also worked for the Canton School District as a janitor for 8 years, retiring in 1990.

He met his wife, Nancy, at Canton Good Samaritan Center in 1992.  They were married in 1995 in the back yard of the Van Laar home.  He attended church at Canton United Methodist Church after he and Nancy were married.  He loved gardening, raising beautiful flowers and fishing.  He had a large coin collection which he took much pride in.  His best friends were his wife and dog, Buddy.