Visitation: Visitation will be Sunday from 3-5 p.m. at Anderson Funeral Home in Canton, SD. 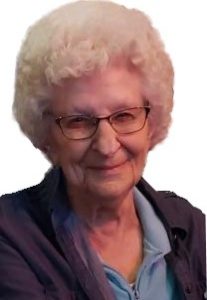 Annie Harris, formerly of Harrisburg, SD, age 88, died Sunday, December 20, 2020, surrounded by her family at Sanford Hospice Cottage in Sioux Falls, SD.  Funeral services will begin at 1:00 p.m. Monday, December 28 at Canton Lutheran Church.  Visitation will be Sunday from 3-5 p.m. at Anderson Funeral Home in Canton, SD.  A link to the livestream of the service can be found at www.andersonandsonsfh.com

In addition to raising her children and helping on the farm, she worked at the pheasant farm, Canton Municipal Liquor Store, the sale barn and cleaned houses.   She was a member of the VFW Auxiliary, the Red Hat Society, and the Center for Active Generations.  She enjoyed painting, embroidery, flowers, gardening, line dancing, and traveling.  She will be remembered for her lefsa, homemade buns, and the Christmas stockings she made for her grandchildren.