Visitation: Visitation, without family, will be Monday from 6-8 p.m. at the funeral home. 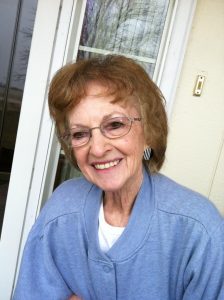 Irene Dorothy Williams, age 88, died Thursday, November 12, 2020 at Alcester Care & Rehab. Private family funeral services will begin at 2:00 p.m. Tuesday, November 24 at Anderson Funeral Home in Canton.  Visitation, without family, will be Monday from 6-8 p.m. at the funeral home.    A link to the livestream of the service can be found at www.andersonandsonsfh.com

Irene Dorothy Williams was born on June 12, 1932 to Marinus and Gertrude (Rozenboom) Middendorp, the youngest of five children.  She was born in Hollandale, MN, attended school at Maple Island, MN then moved to Inwood, IA in 1946, finishing school there.  She moved to a farm south of Canton in 1950.  She married Lester Williams on December 12, 1953.  The couple farmed near Sioux Falls until moving to a farm near Canton in 1960.  She lived on the farm until moving to Hudson Care & Rehab in 2016.  In her early years, she also worked at A & R grocery store.

In addition to raising her children, Irene enjoyed quilting, making rag dolls, crossword puzzles, birds, doodling, and was an avid reader.  Her favorite hobby was her flower gardens.  She had flowers all over the yard and a 20×40 garden in her back yard with a little bit of everything.  Over the years she gave away many varieties of flowers and could tell you what each one was.  She was known for her quick wit, you never knew what she might say or do, she loved gag gifts at Christmas, and she brought a lot of joy to our family.

Grateful for sharing her life are her husband of 66 years, Lester; sons, Stephen (Deb) Williams,  and Jeff Williams, all of Canton, SD; grandchildren, Racheal (Steve) Clay, Jody (Joel) Bentz, Steve (Loralie) Williams , Mindy Williams, and Veryln (Anje) Williams; 15 great-grandchildren; 3 great-great grandchildren, along with a host of relatives and friends.  She was preceded in death by her parents and sisters, Mary Jane, Wilma, Corrie and Frances.