Service: Dick and Arlene’s funeral service will be at 2:00 p.m. Thursday, June 23, at Lands Lutheran Church of Rural Hudson, SD 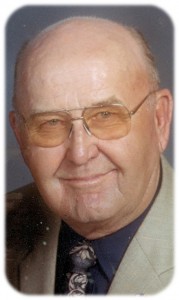 Richard “Dick” Fossum, age 82, passed away Tuesday, June 21, 2011 at the Sioux Falls Good Samaritan Center due to complications of a stroke he suffered in April.  Dick and Arlene’s funeral service will be at 2:00 p.m. Thursday, June 23, at Lands Lutheran Church of Rural Hudson, SD.  Interment will be in the church cemetery.  Both visitations will be Wednesday from 2:00 to 8:00 at Anderson Funeral Home in Canton, with family present from 6:00 to 8:00 p.m.
Dick was born November 28, 1928 in Lincoln County, SD, to Oscar and Gina (Lee) Fossum.  He attended country school and graduated from Canton High School in 1946.  He attended South Dakota State University for a year before he was drafted into the U.S. Army.  He was stationed at Ft. Leonard Wood, Kansas during the Korean Conflict.
Dick married Arlene Tuntland December 16, 1950.  He farmed south of Canton with his wife, of 60 years, and his son Gregg.
Dick was a member of Romsdal Lutheran Church and served his church in many capacities.  He worked briefly for the Clark County Soil Conservation District, and served on the Lincoln County Soil Conservation District for many years.   He served on the State Conservation Commission and was a Lincoln County Commissioner.  He was a member of the Sons of Norway and enjoyed collecting cars and tractors.  He was very fond of his furry four legged friends.
He was preceded in death by his wife, Arlene; parents; brothers, Orvin and Eldon; sister-in-law, Henrietta; and a great nephew.
Grateful for having shared his life are his son, Gregg, Beresford; daughter, Gail  Fossum-Shea (Craig), Sioux Falls; sisters-in-law, Evelyn Fossum, Canton and Betty Boldt (Burleigh) Sioux Falls; nieces, Luella (Perry) Schneller, Forest Lake, MN, Eunice (Randy) Amundson, Sioux Falls, Pam (Dave) Gillespie, Hudson, and Dr. Faye Fossum, Canton; and several great nieces.   He will be greatly missed by his friends, especially his Pinochle buddies, and many other friends and family.