Service: A memorial service will be held at 2:00 pm , Friday, December 2 at Ascension Lutheran Church in Brookings, SD If desired, donations can be made to Feeding South Dakota. 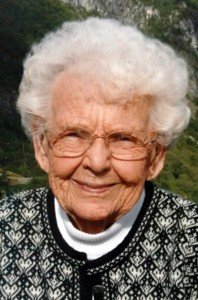 Much of Dorothy’s life was spent in SD: raised in Canton she attended Augustana College in 1936, married Gorman Reynold Nelson in Canton in 1937, and lived in Miller, Madison, Sioux Falls, Rapid City and Brookings (with an out-of-state stint in Minneapolis, MN, Indianapolis, IN, and Oak Ridge, TN in the 1940’s).

During her 50+ years in Brookings, Dorothy continued her family’s tradition of Lutheran ministry and outreach. In 1974, at age 57, she and Gorm opened The Country Shop which gave an outlet for her artistic talents as a potter and rosemaller, expanding over time to include other family members and many more hand-crafted items.

Dorothy is predeceased by her parents, Edward and Hazel (Williams) Nervig, her husband Gorman Nelson, four of her five brothers, Edward Jr., Neuman, N. Nordell, and Robert Nervig, and one of her five grandchildren, Perry Nelson.

Dorothy will be remembered for her ministry, her friendship, her love, and her joy in sharing gifts from The Country Shop. She was the center of the family, feeding bodies and souls, wrapping each member in a handknit Norwegian sweater. Few people had the appreciation for life that Dorothy had – from her morning walks, good coffee and homemade bread, to her love of classical music, a well-turned pot, and a good book. She loved her family, her weekly bible study group, and spiritual learning. “Earth has no sorrow that heaven cannot heal!”

Burial was held in Canton, SD on Monday, November 28. A memorial service will be held at 2:00 pm , Friday, December 2 at Ascension Lutheran Church in Brookings, SD If desired, donations can be made to Feeding South Dakota.